March 30, 2016: Hmmm…think my sedum nussbaumerianum and echeveria black prince needs to be repotted? 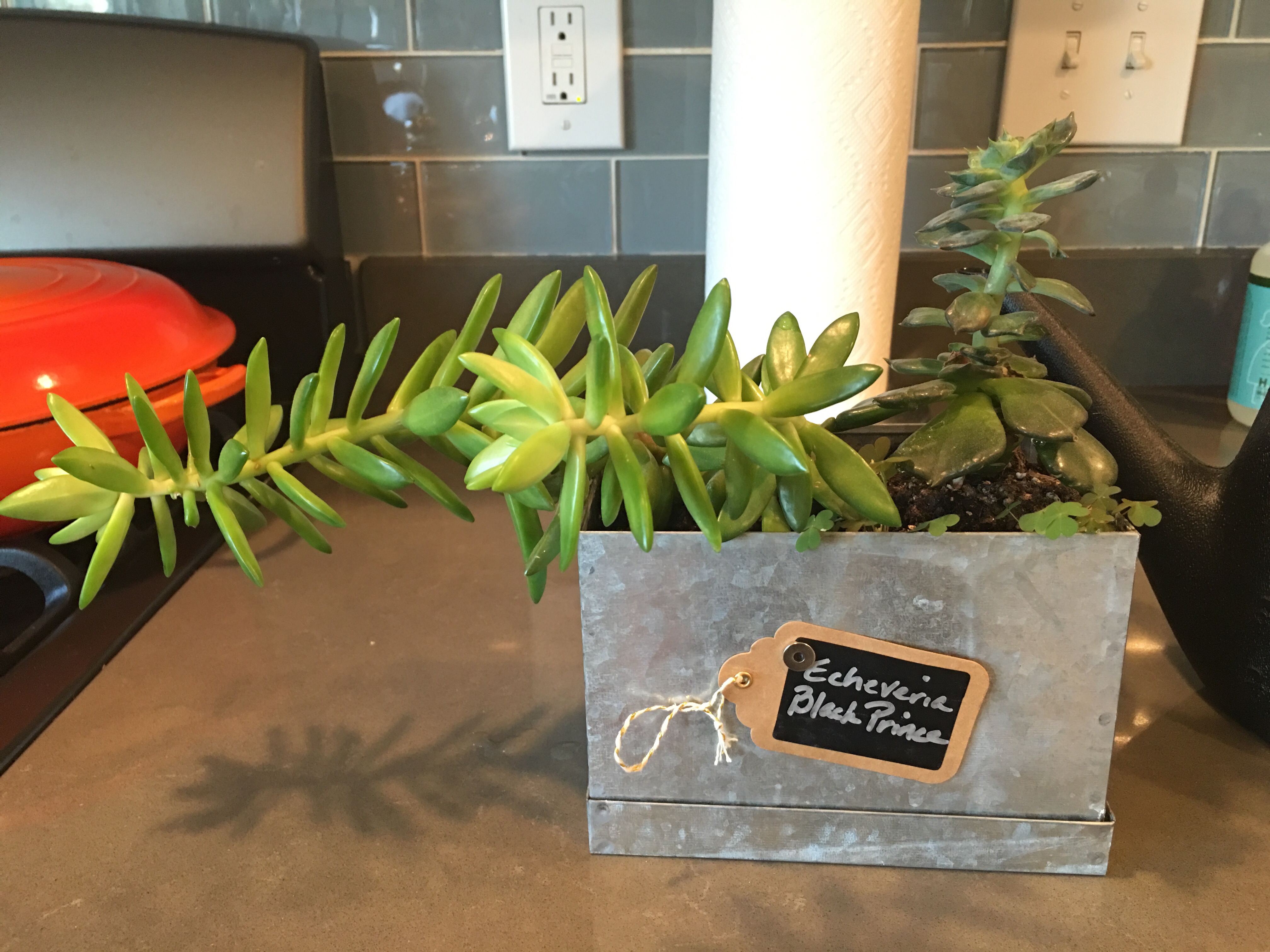 It’s been ten months or so since I began to bravely bring green, living things into our condo space. Bruce would halfway joke that the plants I’d bring home have come to die, declaring that no green thumbs were in residence here. But since I saw the Urbio vertical wall plant system, I became obsessed with bringing live greenery into our space.

I convinced myself that we too can be hosts to green, living things. And they will survive and thrive in our condo.

Or would die trying.

So how have the plants I’ve brought home (or herbs I’ve grown) faired in the condo? Well here’s my update on my succulents, flower and tropical plants (the good, the bad and the ugly). I’ll do another post to feature my air plants (and, of course, tour my growing “faux floral” collection).

I placed these sedum nussbaumerianum and echeveria Black Prince (otherwise known as a “hen ‘n chick”) plants side-by-side in this galvanized tin box last June. Here’s the before picture on 6/24/15, a few days after I brought these home from Trax Farms in Pennsylvania. 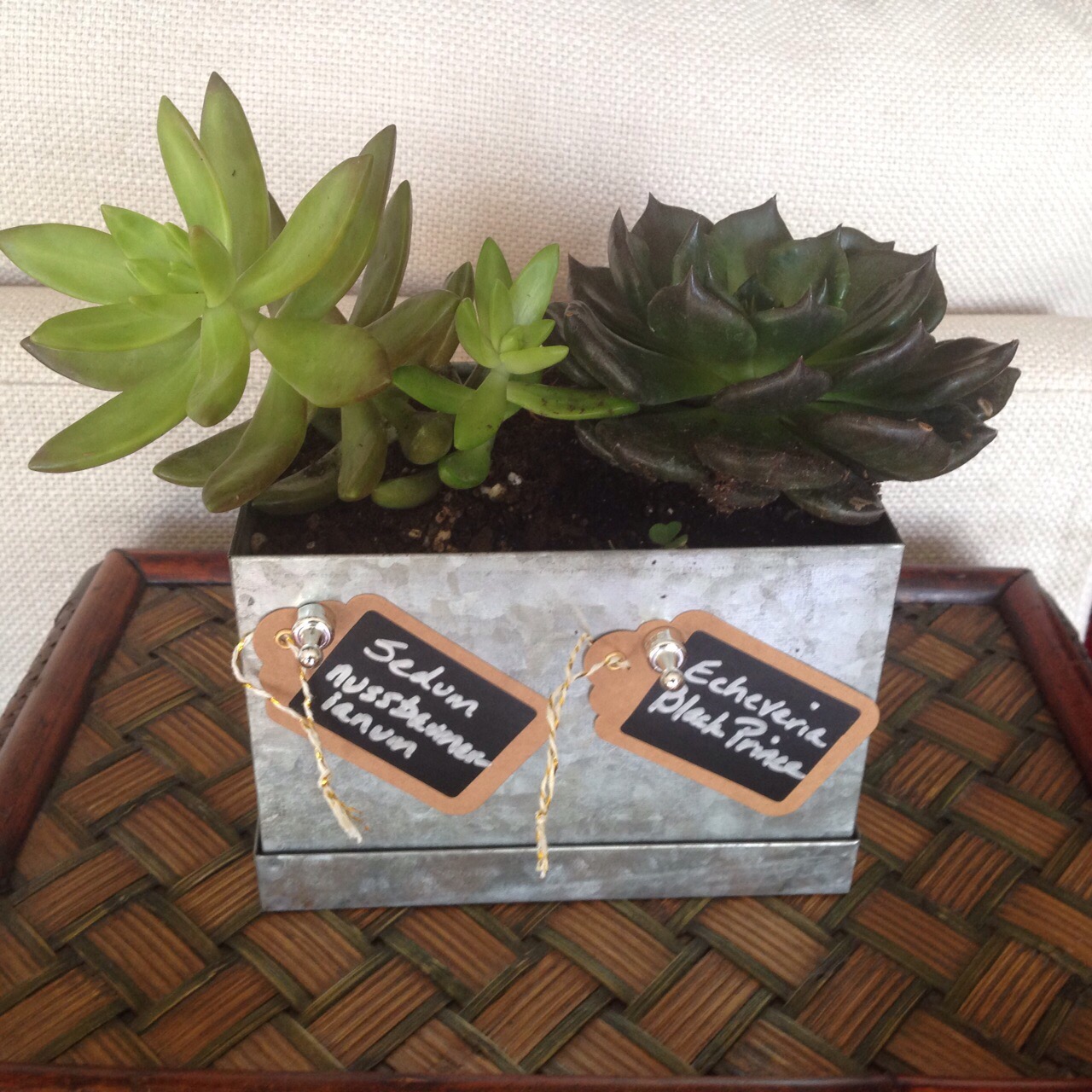 And here they are today. They were turned in the opposite direction (so the sedum plant was pointed towards the balcony door, growing, reaching, straining for the sun). 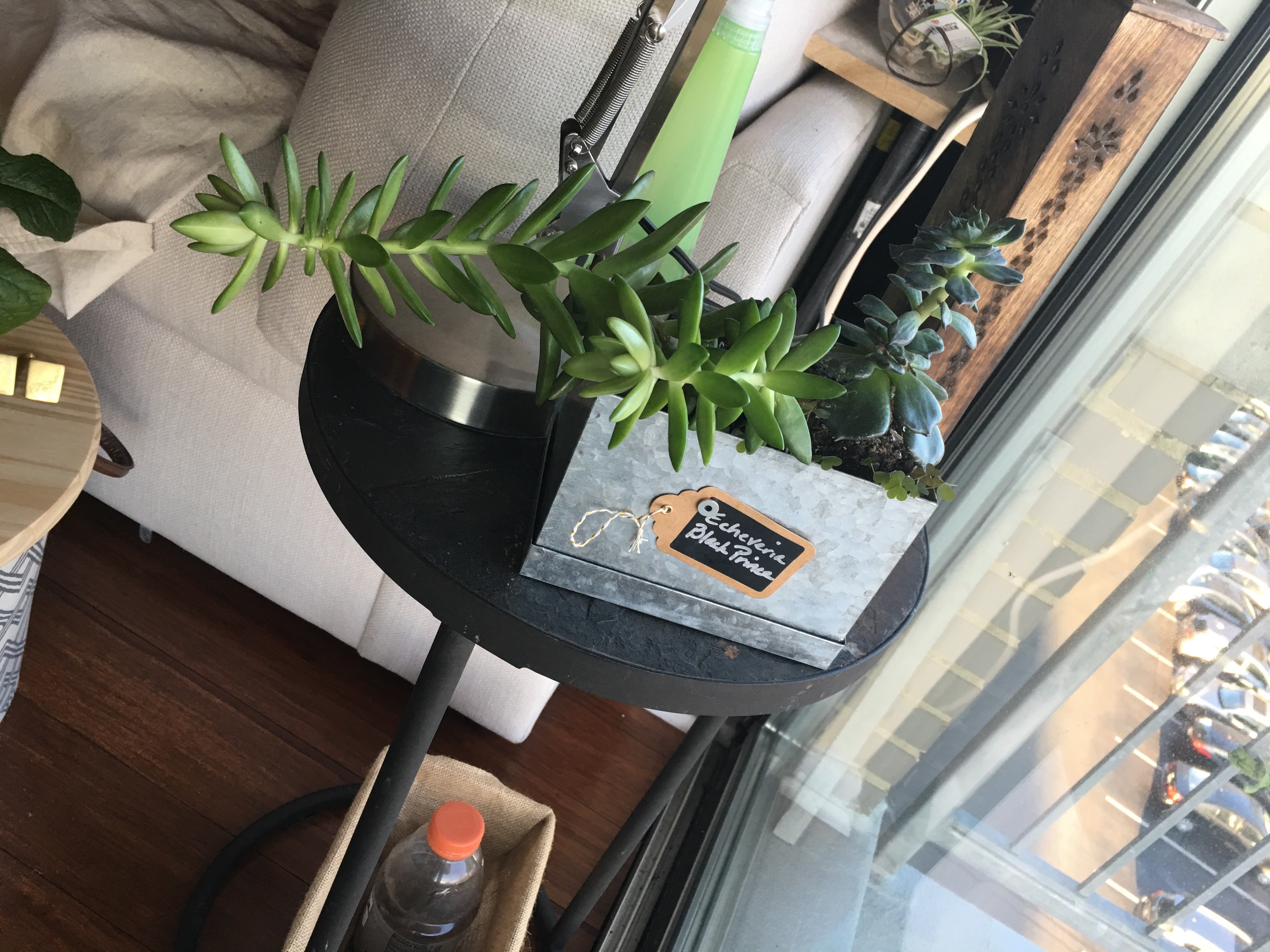 Verdict? Repot each plant (and pray for survival).

Here’s a before picture of my Sunsparkler Lime Zinger 6/24/15. Also brought home from Trax Farms. 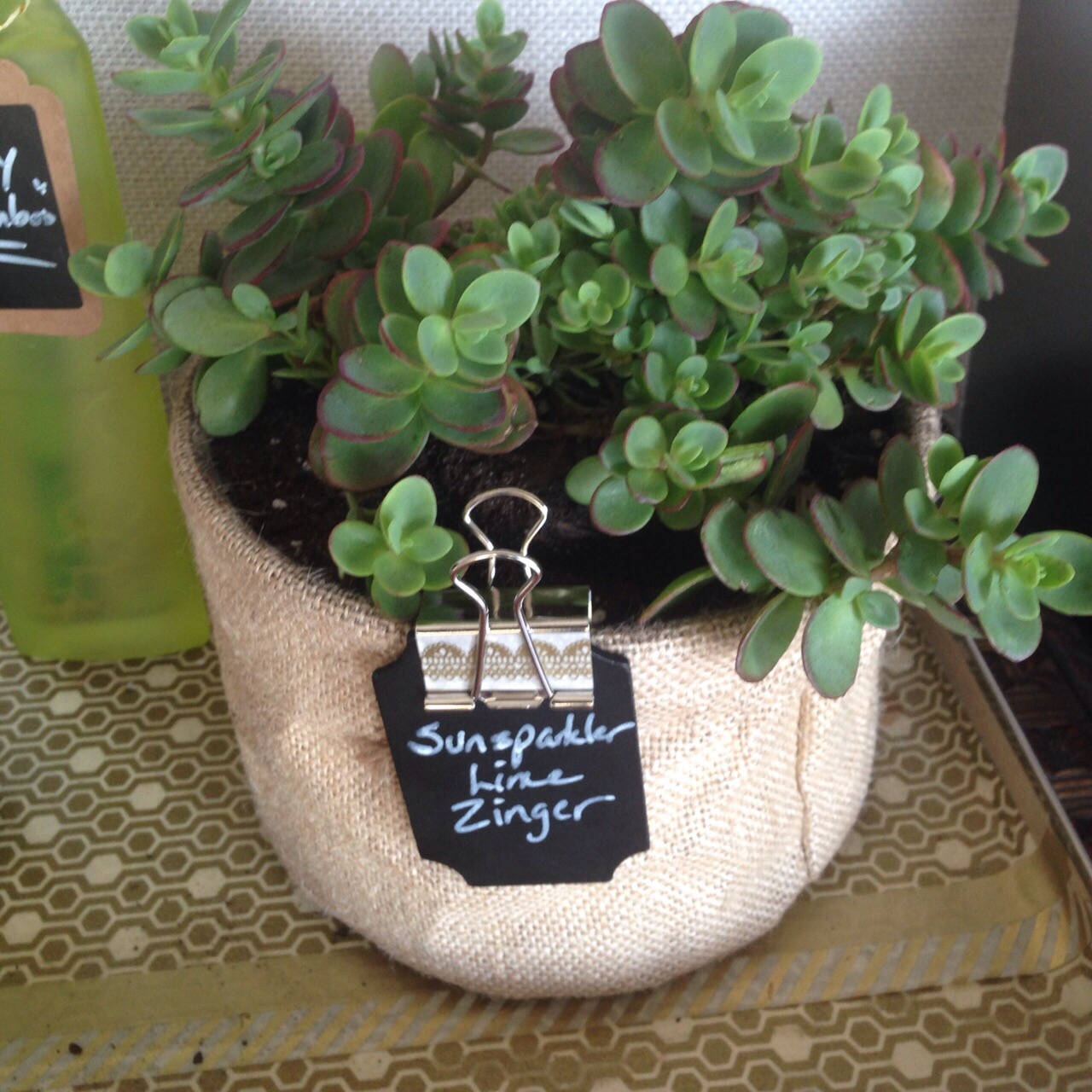 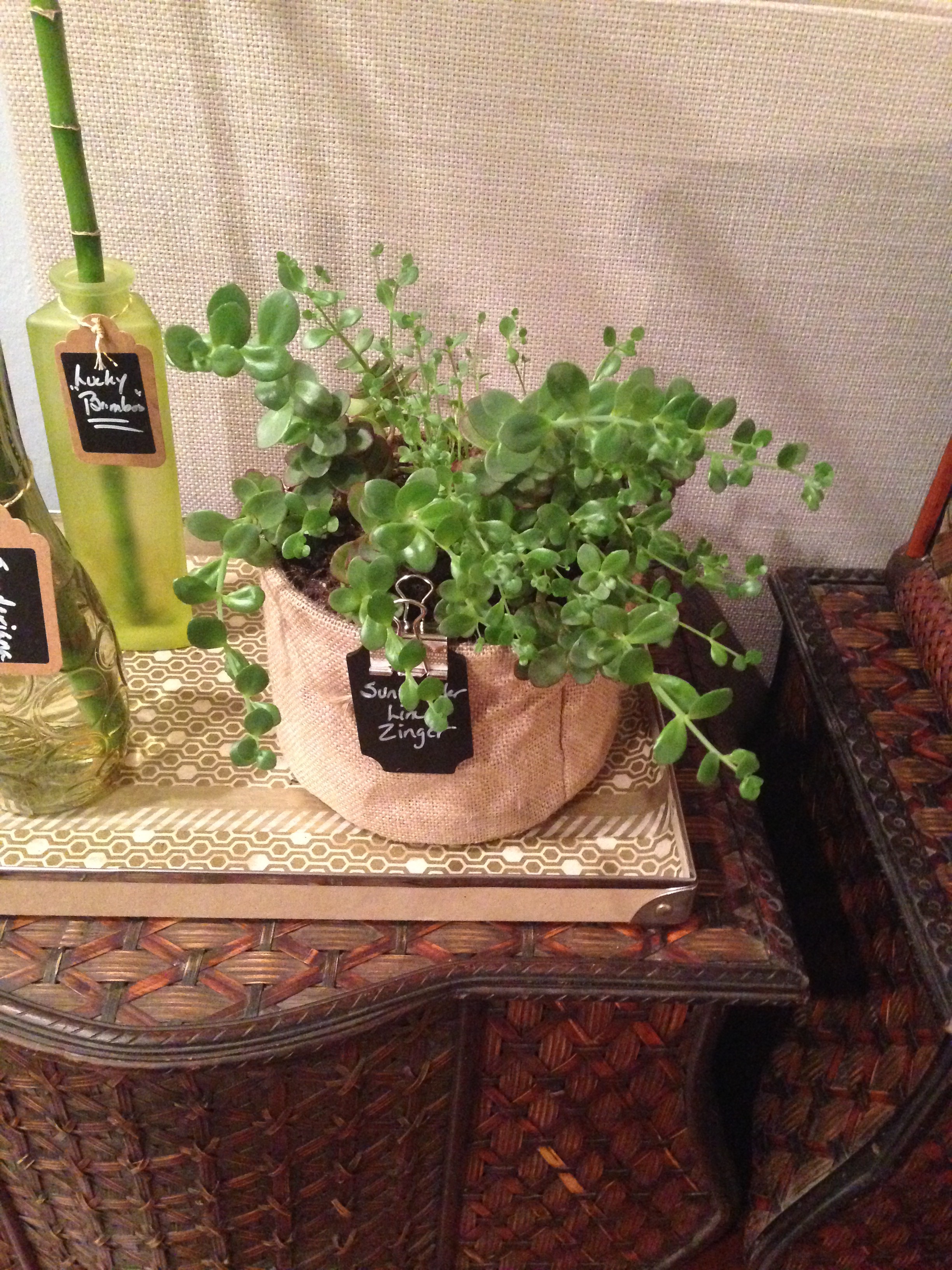 …and here it is a month later (July 20, 2015), straining towards the sun while positioned six feet across the balcony windows and door. 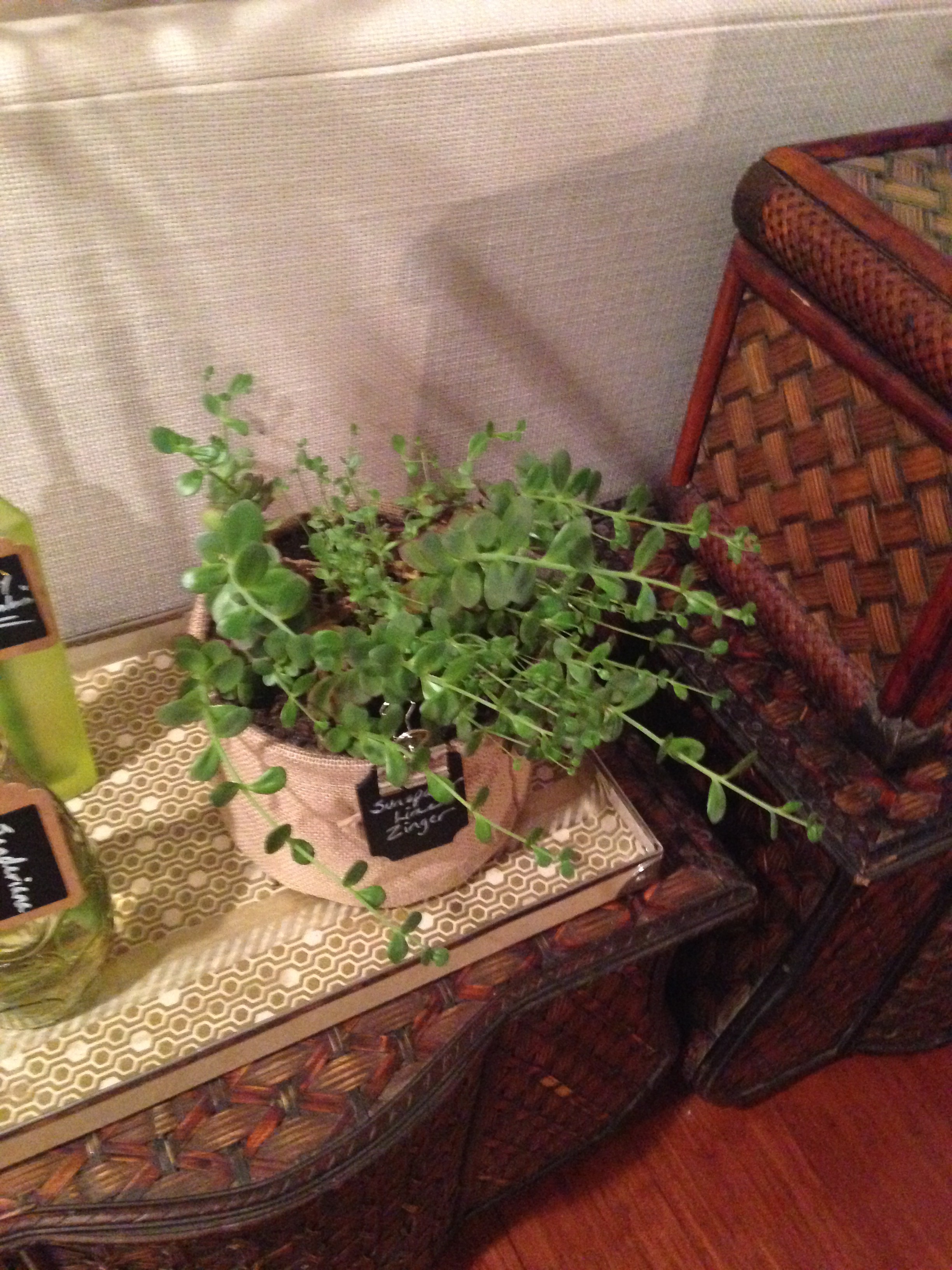 Today (sigh): After moving it directly by the window and giving it plenty of water, it’s grown over the sides of the burlap pot with smaller weaker leaves spring from the roots. 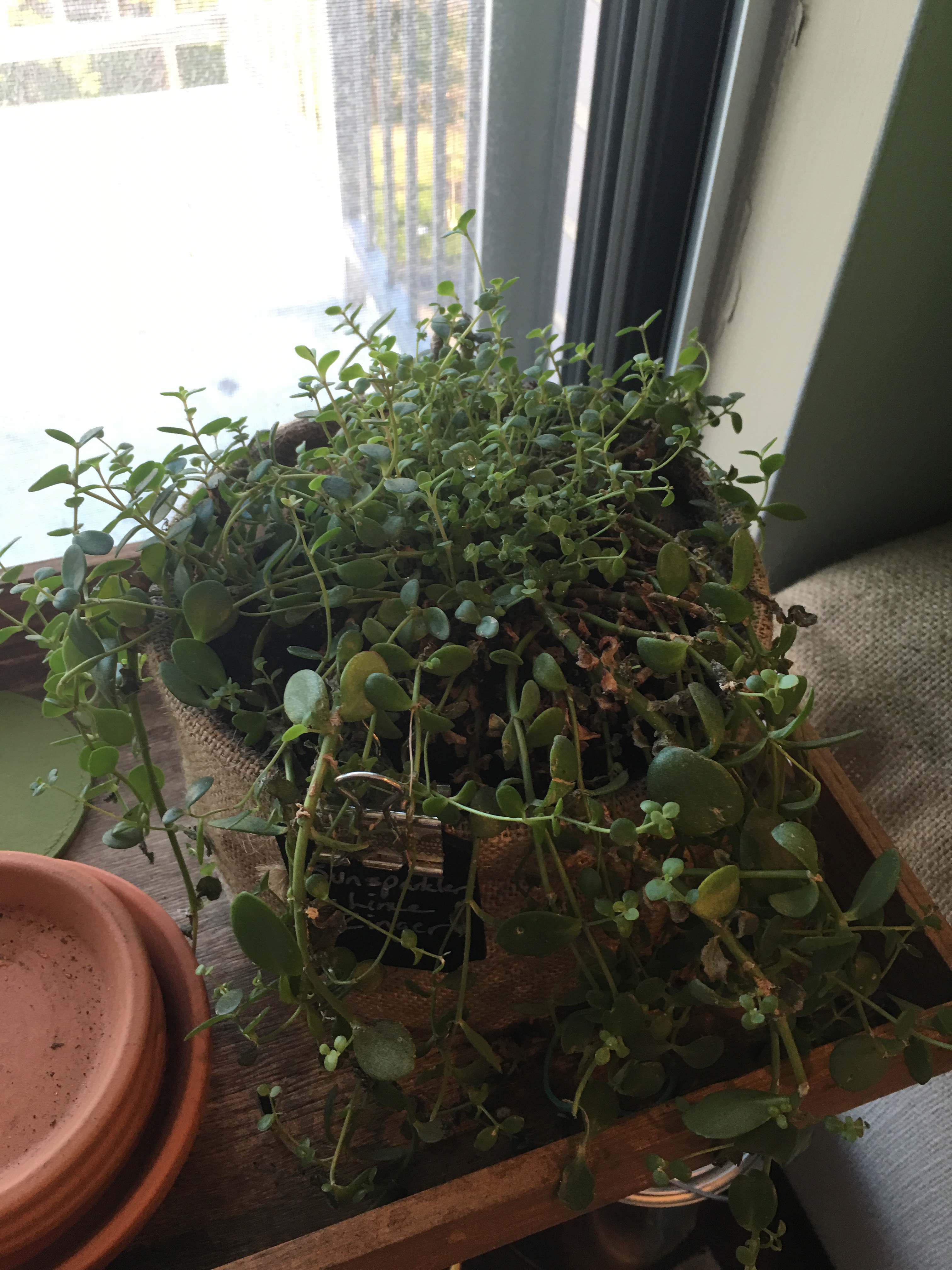 Verdict? Not sure if the roots are overcrowded or if I under or over watered the plant. Not sure what to do here. But I will give repotting it a try. And if that doesn’t work, I’ll sadly let it go.

I brought these beautiful succulents home all the way from California. My souvenir from our visit to the Santa Barbara area. I repotted them, placing each in this small tin vessel in early May 2015. 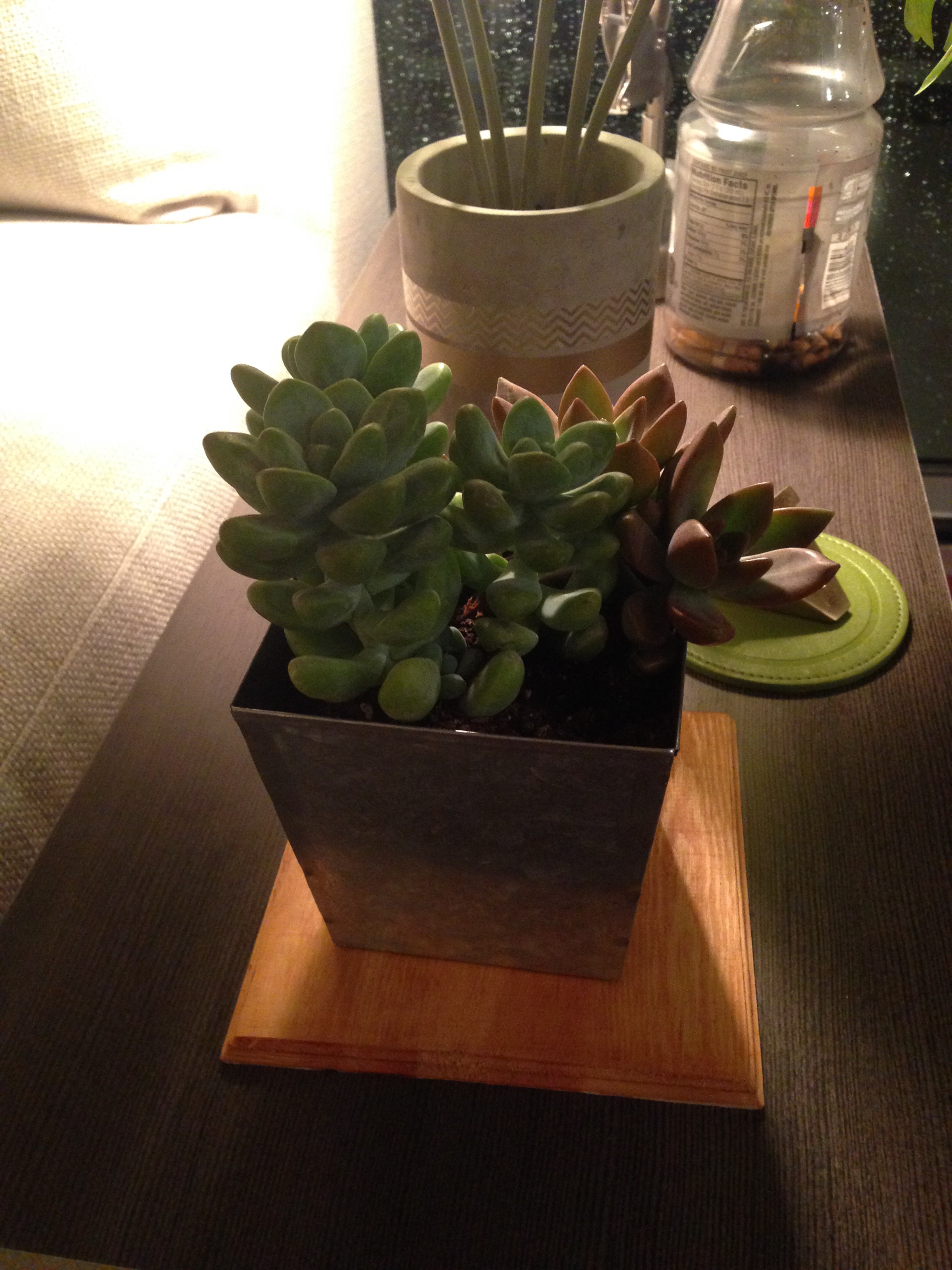 The sedum leaves soon after fell off (too much watering apparently). So what little of the echeveria that survived was repotted again in a bigger galvanized metal container along with this crassula “Campfire” coccinea I brought home from Trax Farms in June. 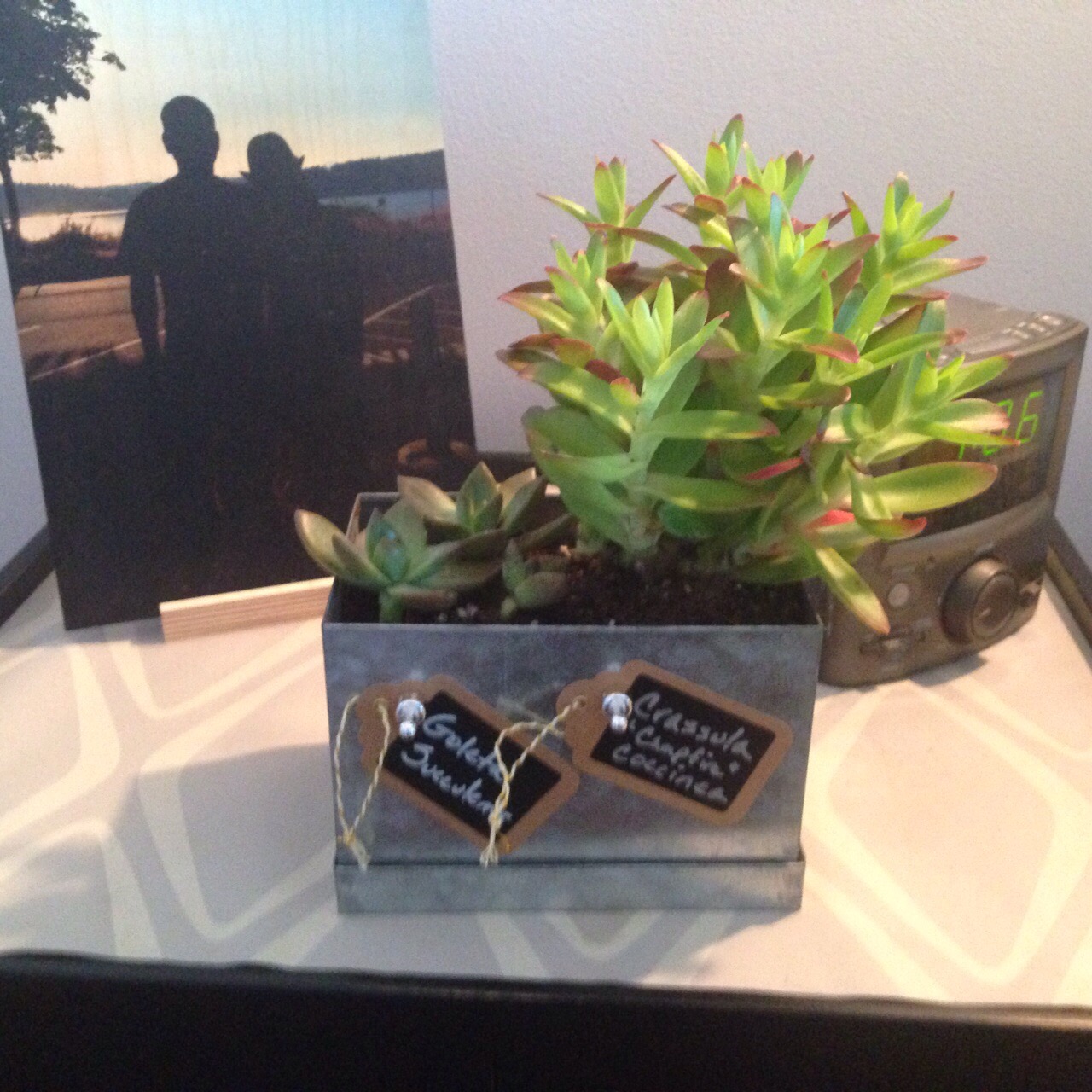 Verdict? The succulent buds from Goleta did not survive long after that. And we know what happened to the campfire coccinea when I accidentally tipped over the plants table in February. 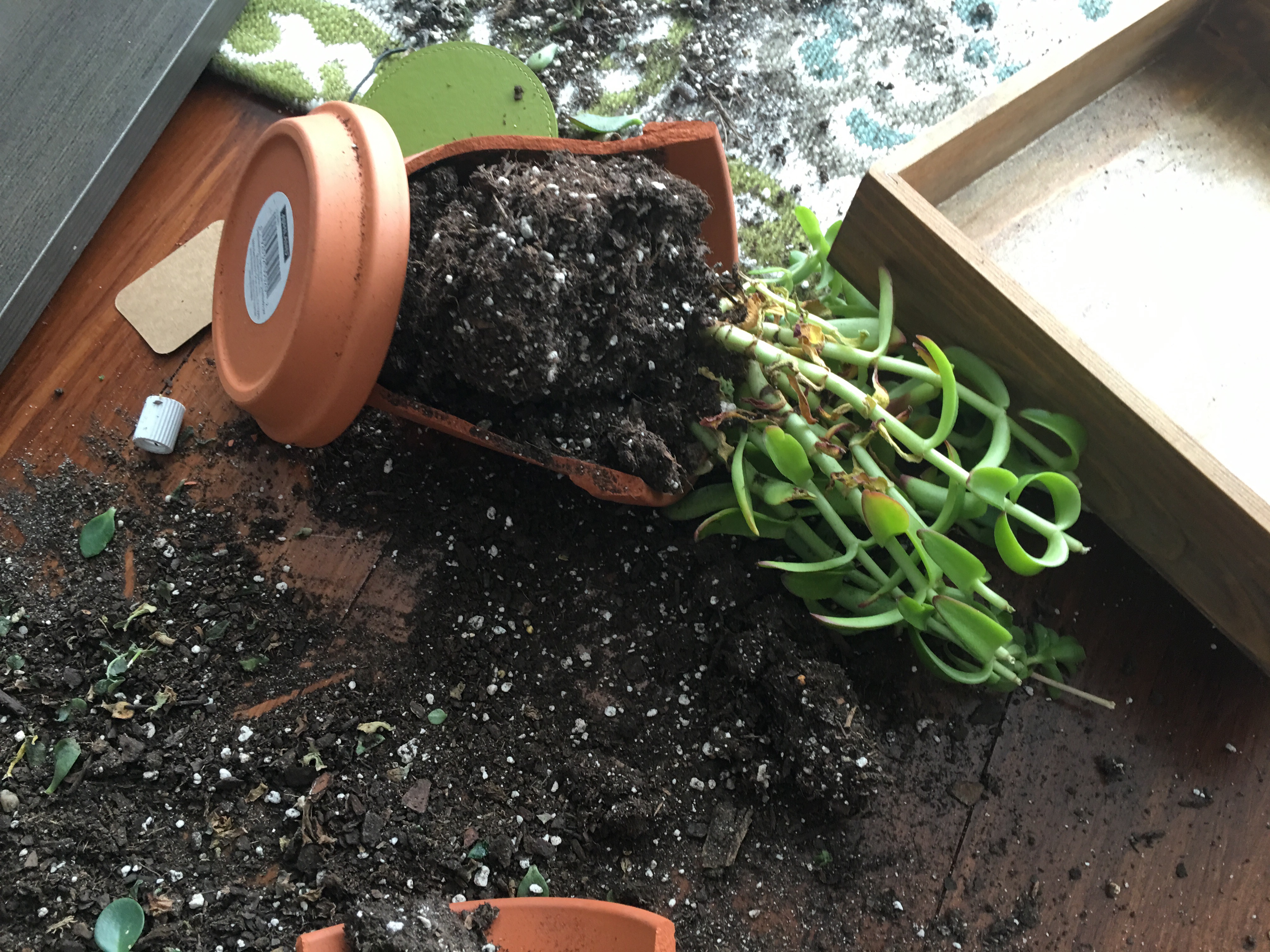 Although the Campfire plant was repotted after this mishap (for a third time), it did not survive. The roots were done. Which was a real shame because this plant liked to GROW. I had to chop off the ends of it frequently because it would grow so long it would hang to the floor.

Be very careful with repotting and watering your plants (and do your best not to disturb the roots). 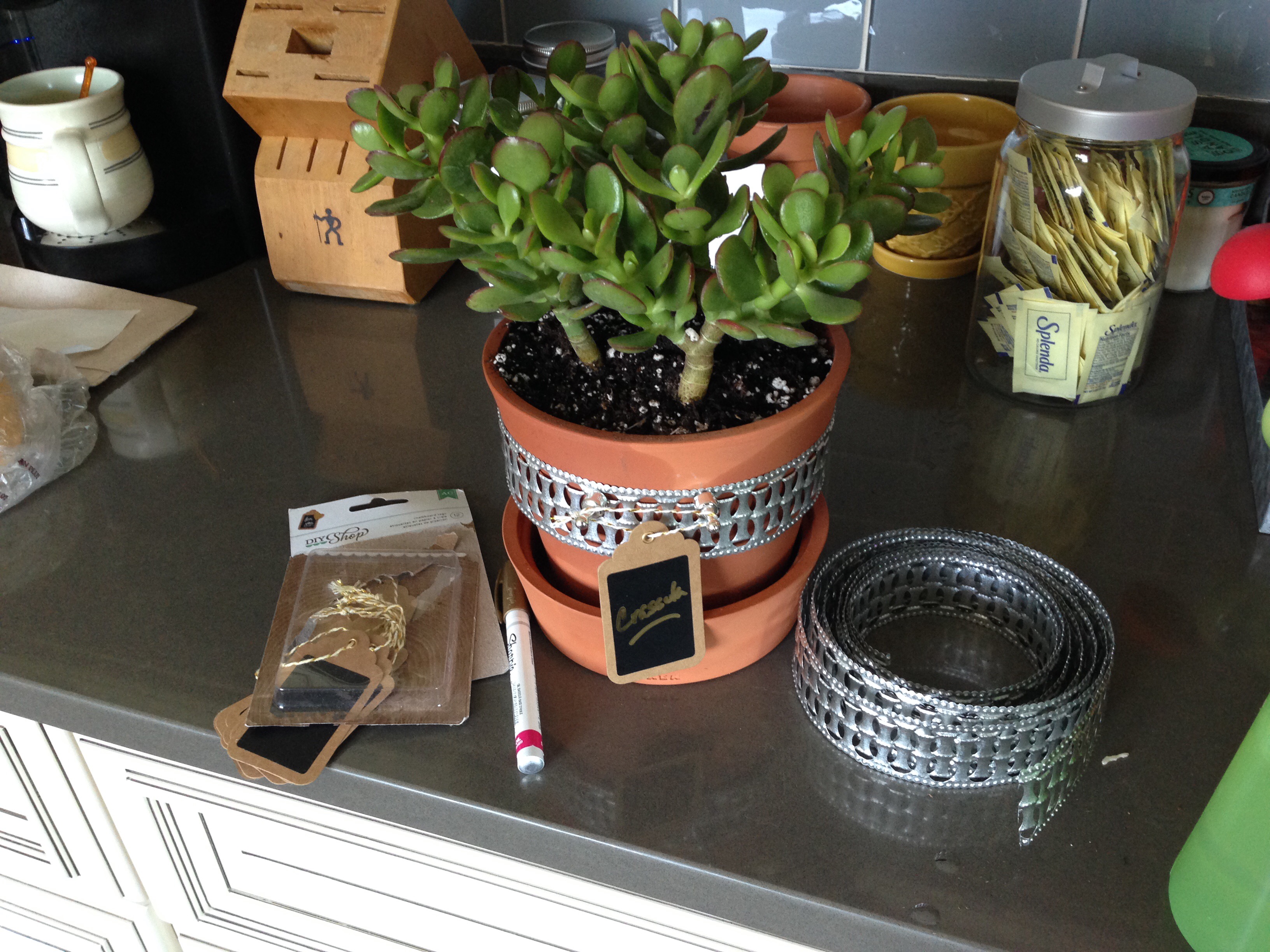 Today? It’s hanging in there. Barely. 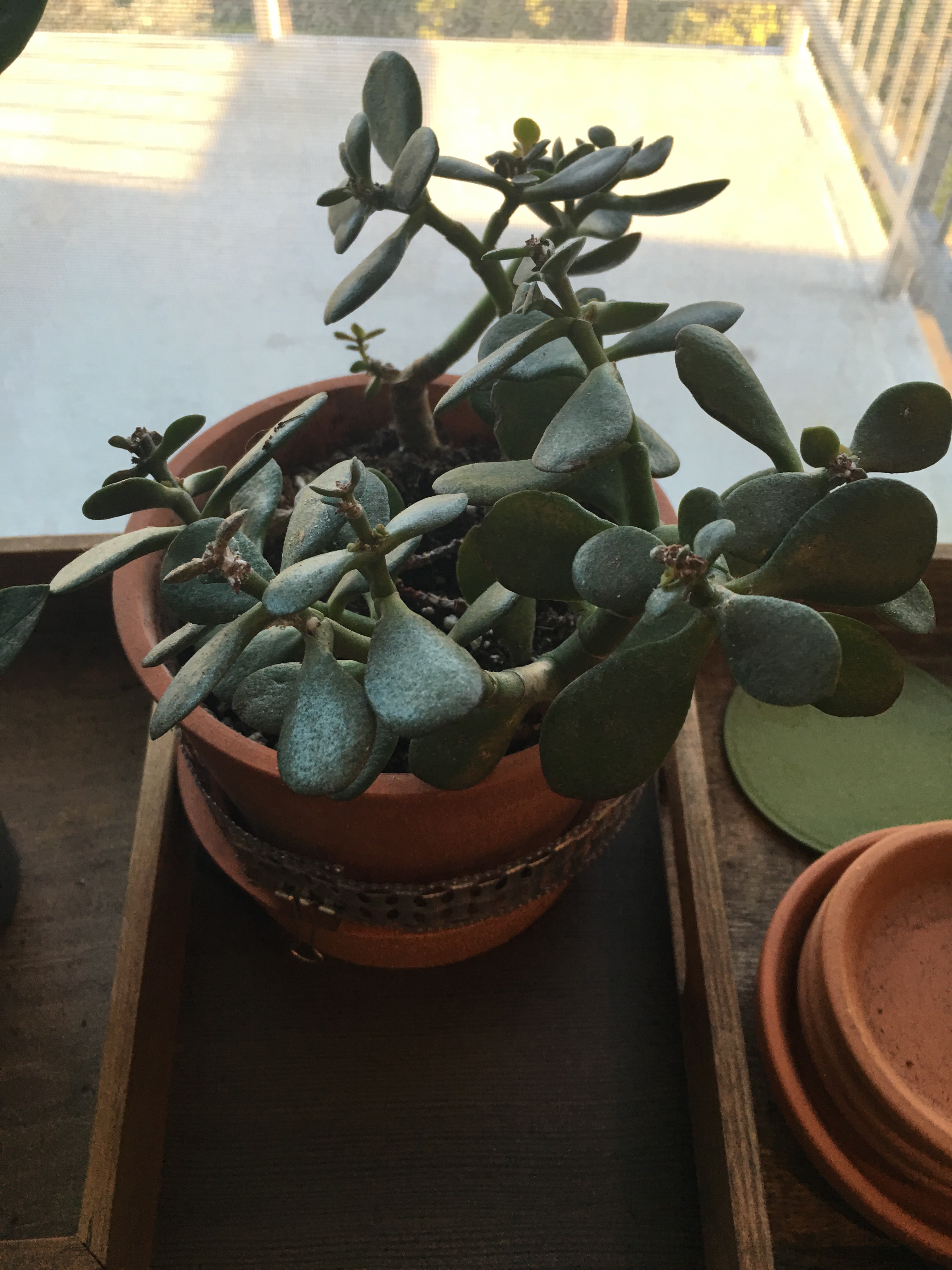 Verdict? It’s not out of the woods yet, but it will survive. I think I overwatered it when I first brought it home. I’m trying to keep it happy by watering it lightly every few days. But it’s hard to get it back to it’s former glory.

In contrast, the Jade crassula I brought home in September 2015 from 5th Street Hardware in DC continues to do quite well. It’s perched on the living room floating shelf. 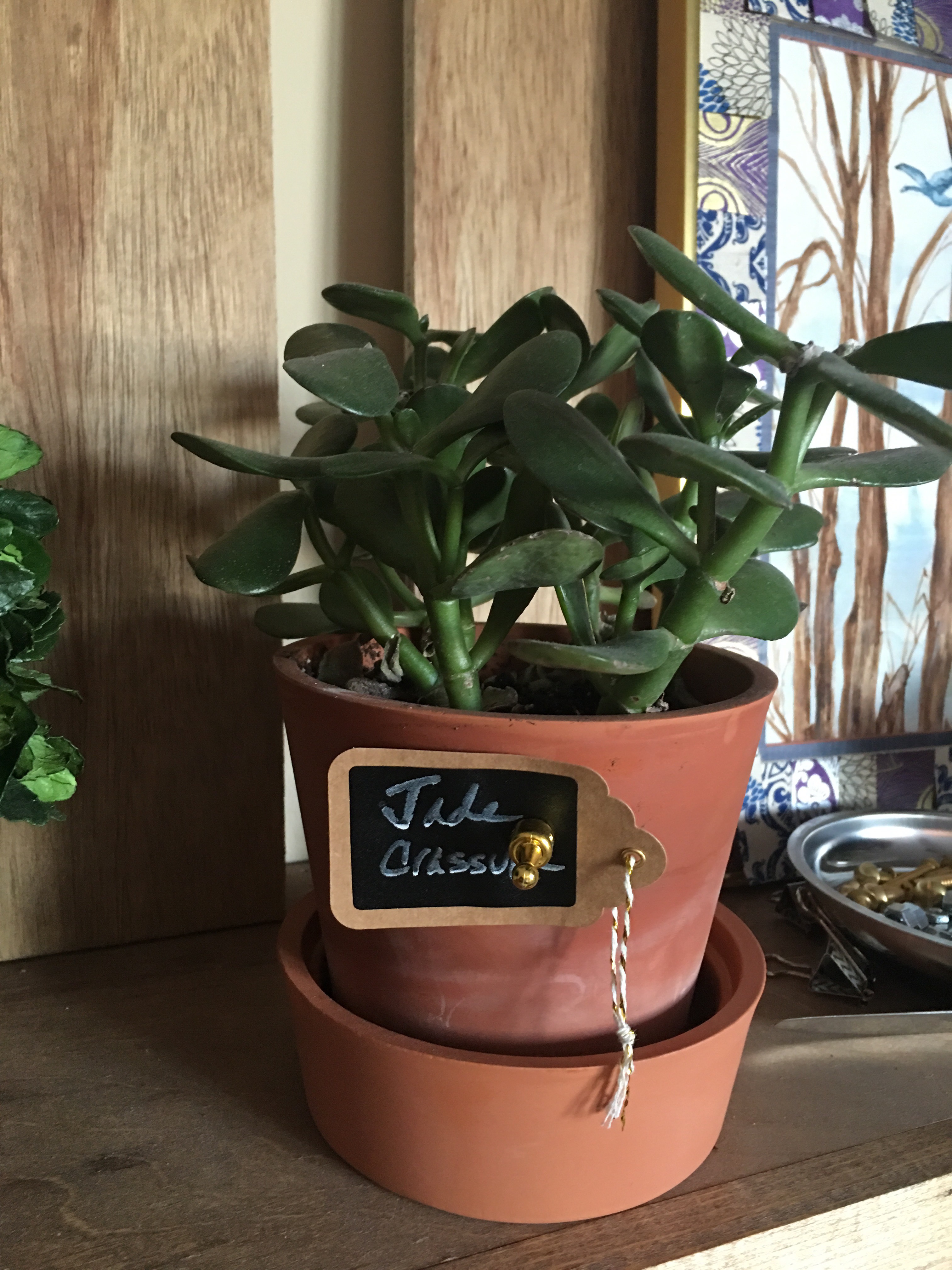 I brought home the marginata plant (on the far left in the picture below) from IKEA (on the same day as the crassula – 5/15/15). 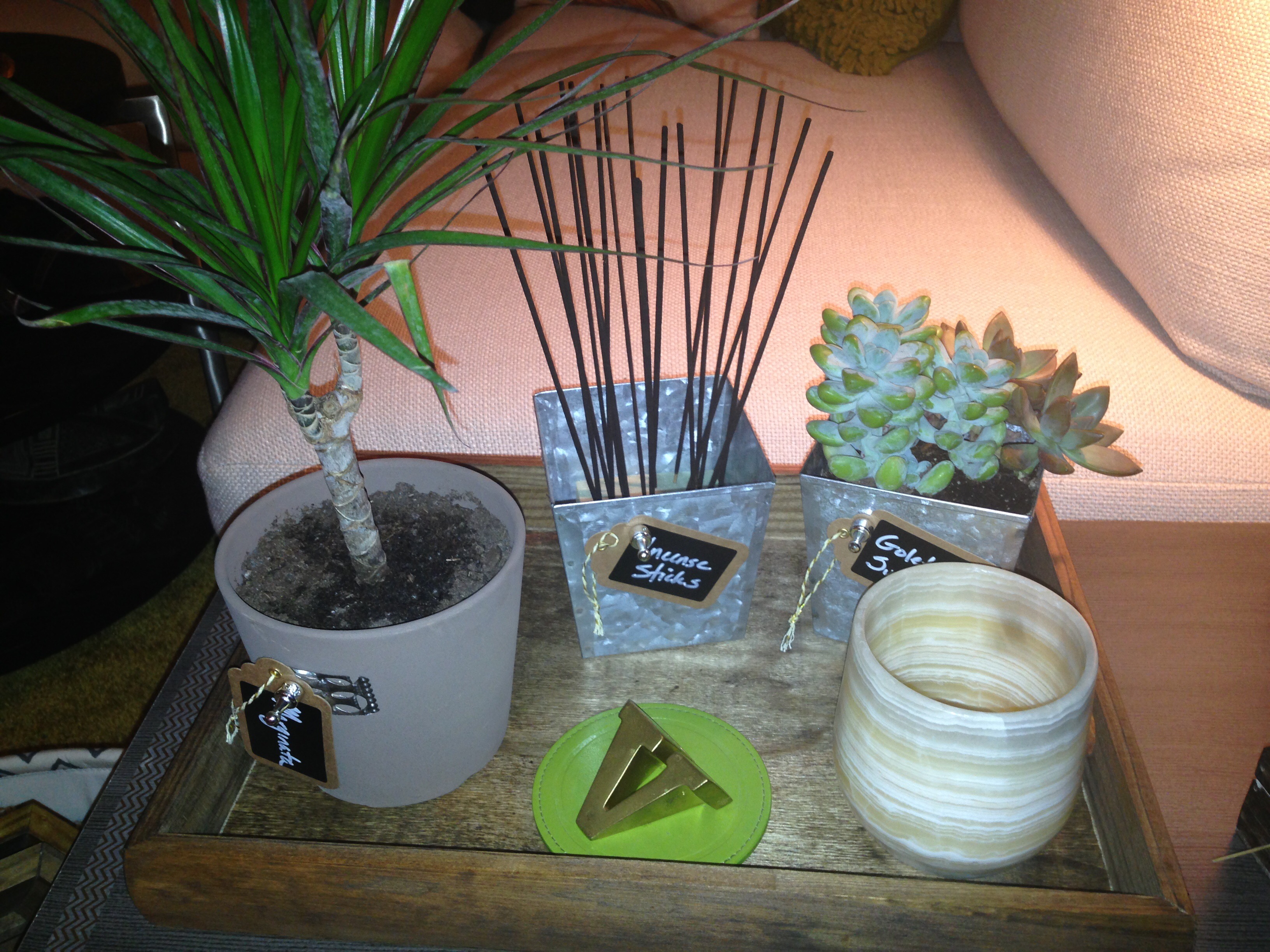 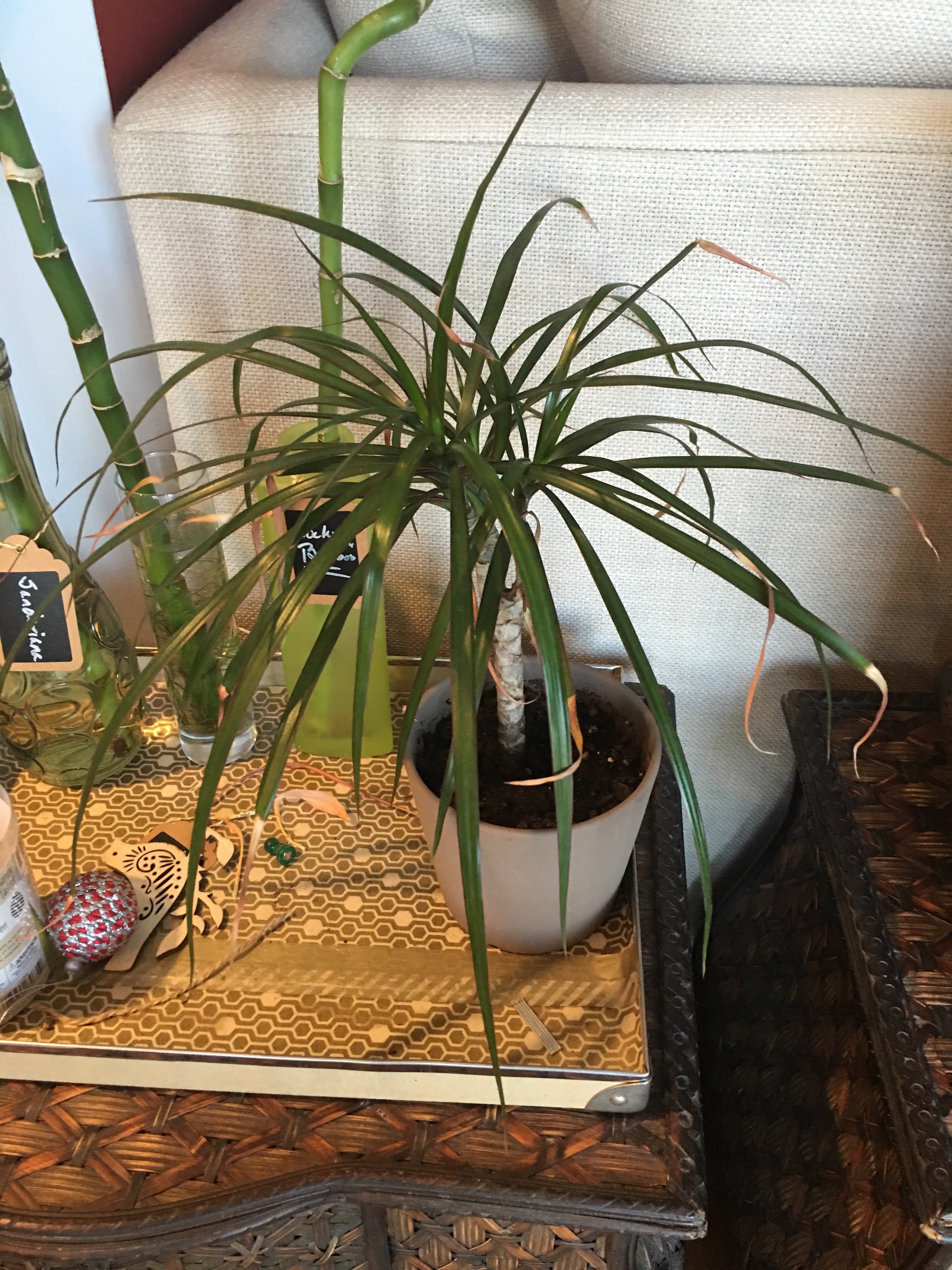 And I think we’re gonna need a bigger pot. I’ve seen these plants, tall and fully mature in the DC office.

I brought my first Lucky Bamboo (or sanderiana) sprig home from IKEA on May 31, 2015. It grew lush and lovely in no time (with it just being placed in a vase of water that was changed every week or so). Long leaves were hanging down so low, it resembled a palm tree. 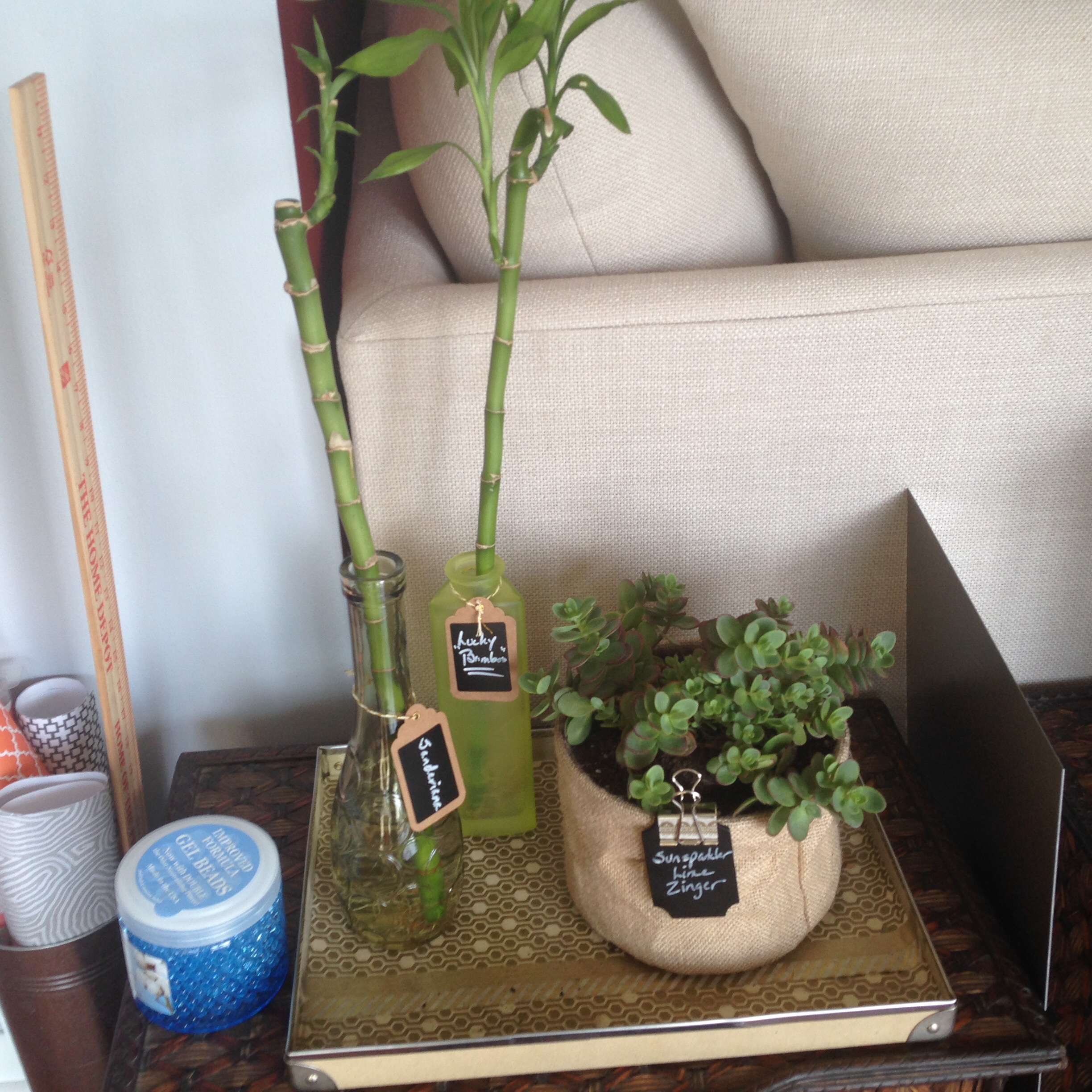 However, about two months ago, the leaves and the stalk at the bottom began turning yellow. I still don’t know how that happened. I eventually let that one go.

Today, I have three sanderiana plants gracing my space. 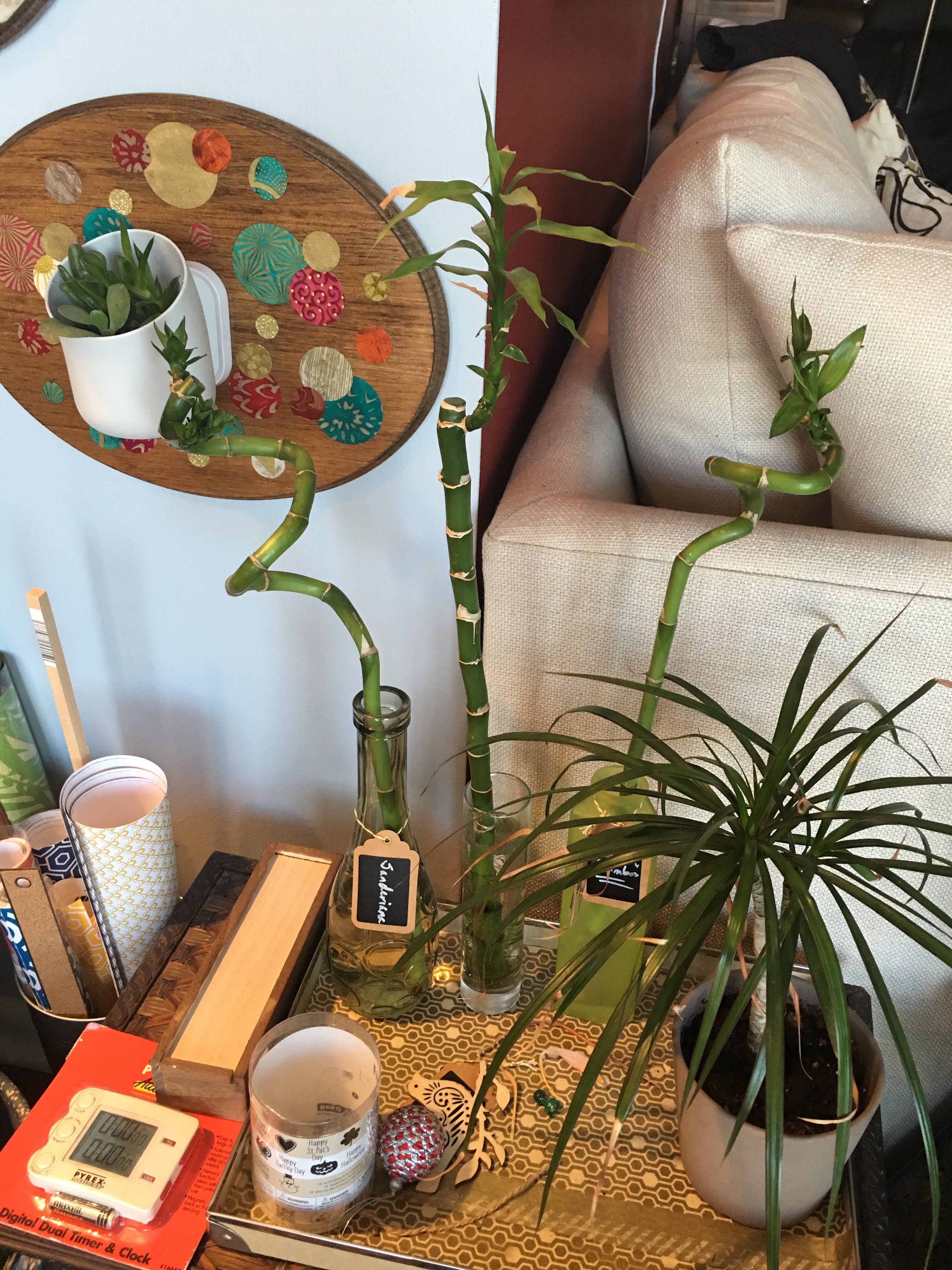 The one in the middle has been around since June (was the young sprig on the left in the picture from last year). And the two curly bamboo shoots were brought home a couple of weeks ago from my recent IKEA trip.

Now the money tree (below) is the oldest plant in the condo. It was the first plant to be brought into our space last spring. I don’t remember the exact date. I bought it on impulse during a trip to our local Giant grocery store. 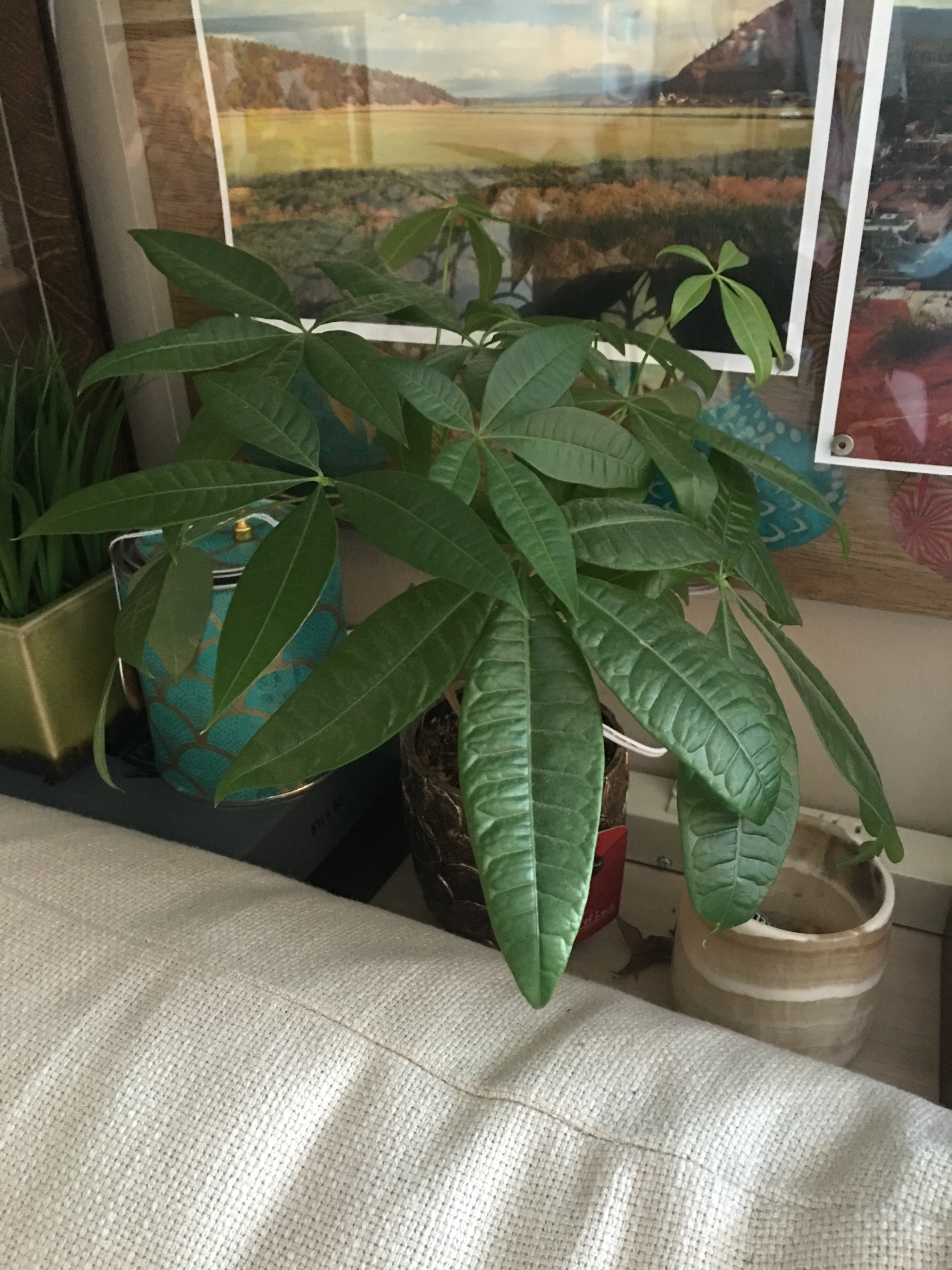 Many say that, like Lucky Bamboo and succulents, this plant is easy to maintain and keep up with as a indoor house plant. Well I had my challenges with it. I lost a few leaves that have turned yellow (overwatering). There were times when I thought I would lose the plant altogether.

But it hung in there and is alive and well on my pipe and poplar table (below my living room wall gallery).

Verdict? Lucky Bamboo and money trees will do well in a space. But you have to be vigilant with the amount (and quality) of water you give them. And, like all plants, give them plenty of sun.

I love Gerbana flowers (so bright and colorful). I was delighted when I found these at the Mount Vernon Safeway in DC. 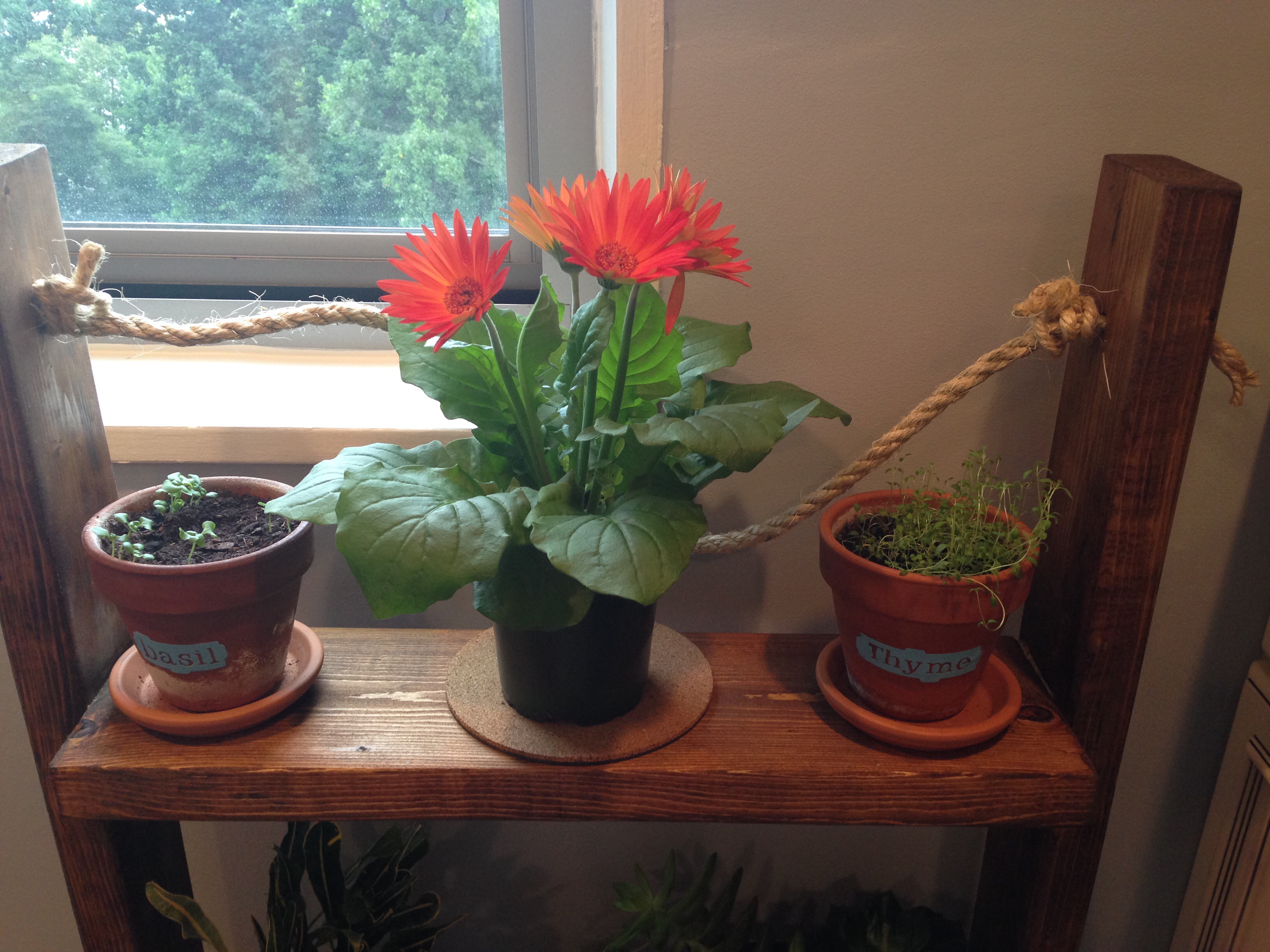 Today, it plant (sans flowers) is thriving in the living room. 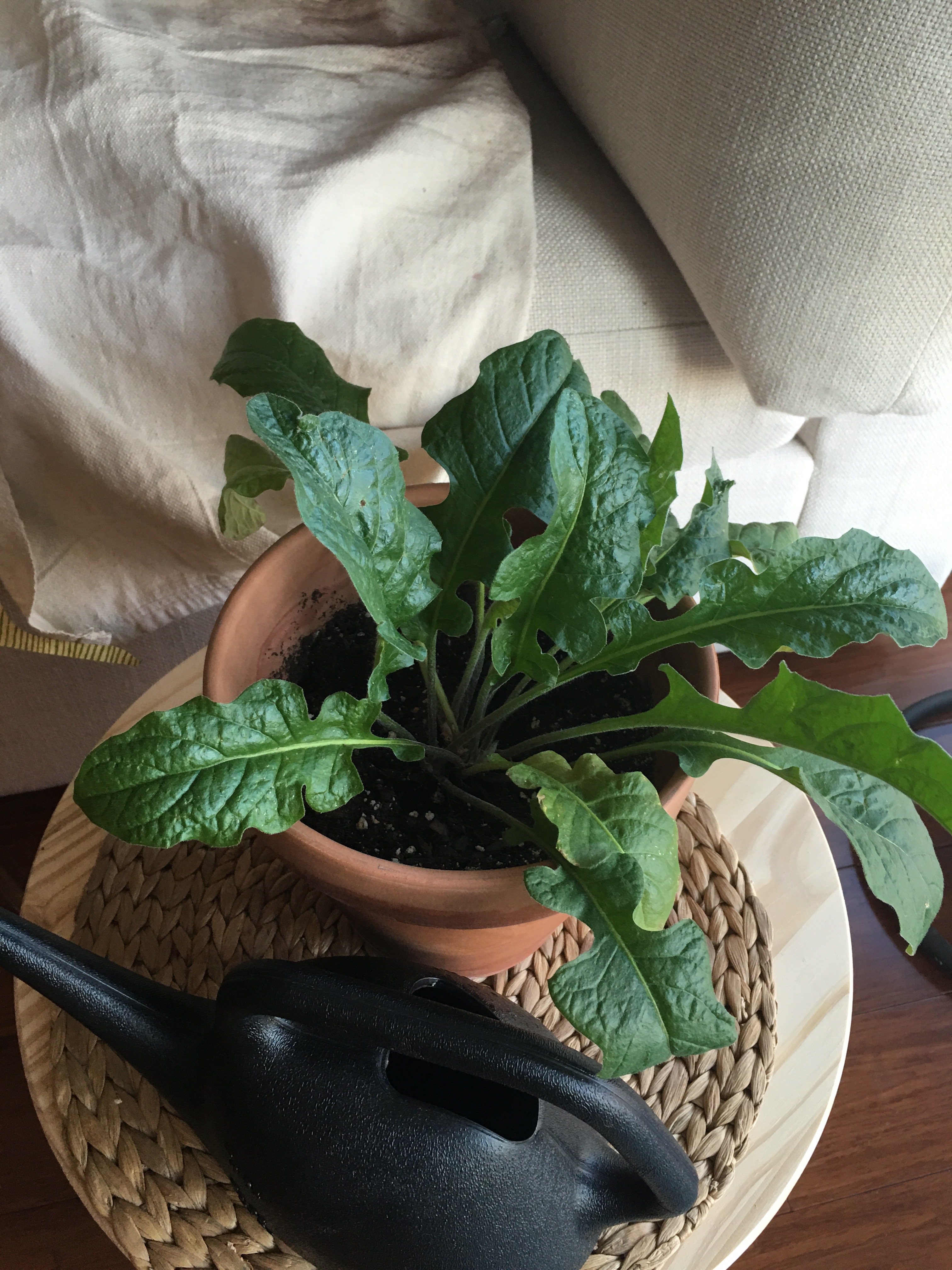 Here’s an interesting twist: Mr. “Brown Thumbs” Bruce convinced me to not toss the plant after my flowers withered and died. He urged me to repot the plant and has taken it upon himself to nurture it (and keep it healthy and strong).

I’m still amazed – both with how great the plant is doing and Bruce’s level of dedication to doing right by this plant. It is truly his baby. We don’t have pets, but I have my plants, and he has his (this one).

Verdict? I try to tell Bruce that no flowers will grow from this plant again. But Bruce defiantly replies “Oh flowers will come. I will see to that.”  He believes in his heart of hearts that the Gerbana will live again in this pot.

And here we are, full circle from a year ago when I first discovered the Urbio vertical planter solution. Once I saw this system, I began to imagine lovely green foilage and buds gracing our walls (and bringing a living, oxygen-enriching element to our condo space).

Well I eventually made good on my promise to bring some Urbio into our space. And I put a personal VidaDIY spin on this system with my Urbio and Perch wood plaques.

I planted these lovely succulent buds into this Urbio “Shorty” vessel in January. 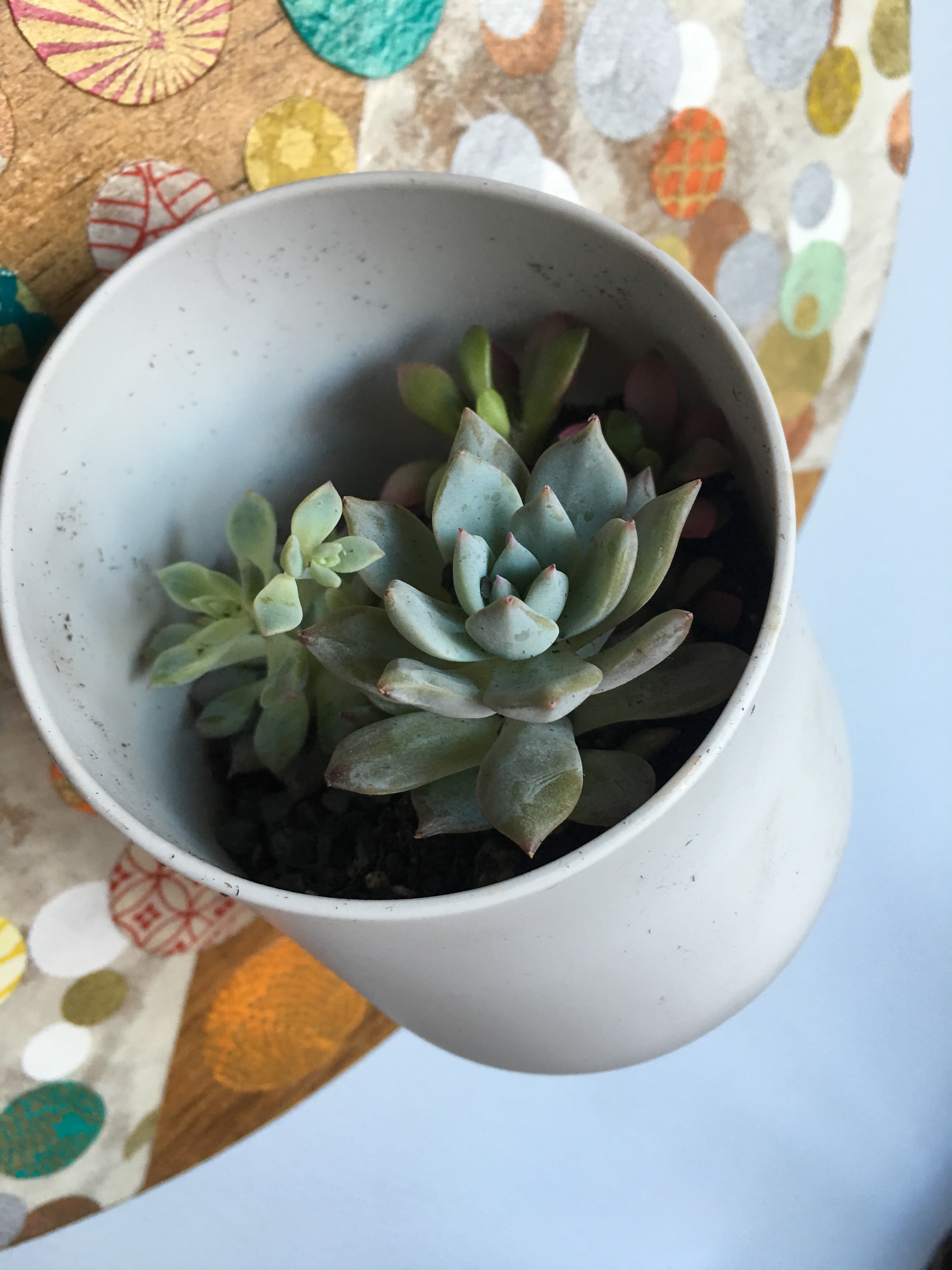 Today, the leaves are growing up and out over the sides. The plants in the other vessel are growing quite all as well. They are loving their “perch” on my craft area wall (across from the balcony). 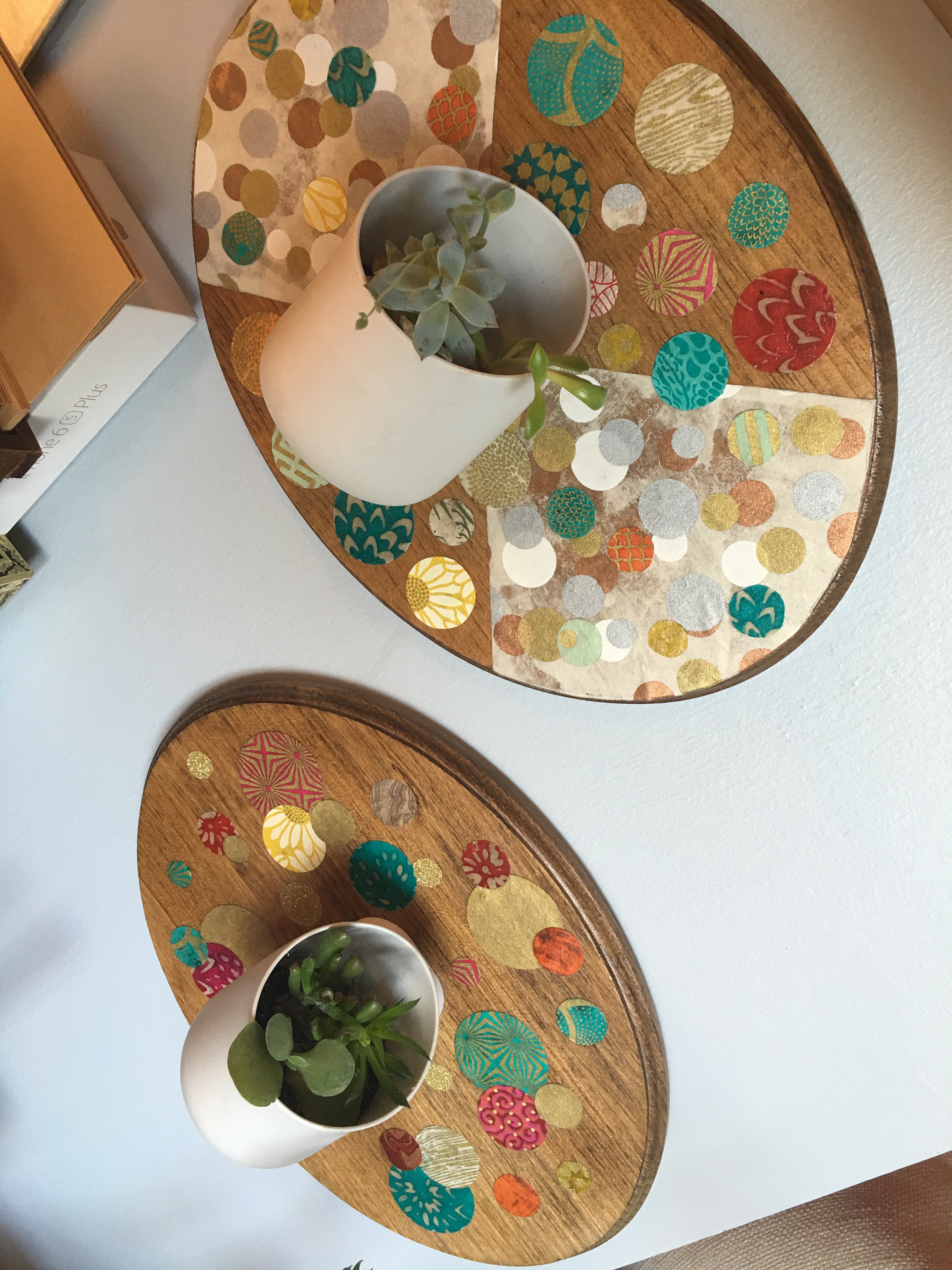 Here are a couple of LiveTrends magnetic pots that I got just about a year ago from Home Depot. 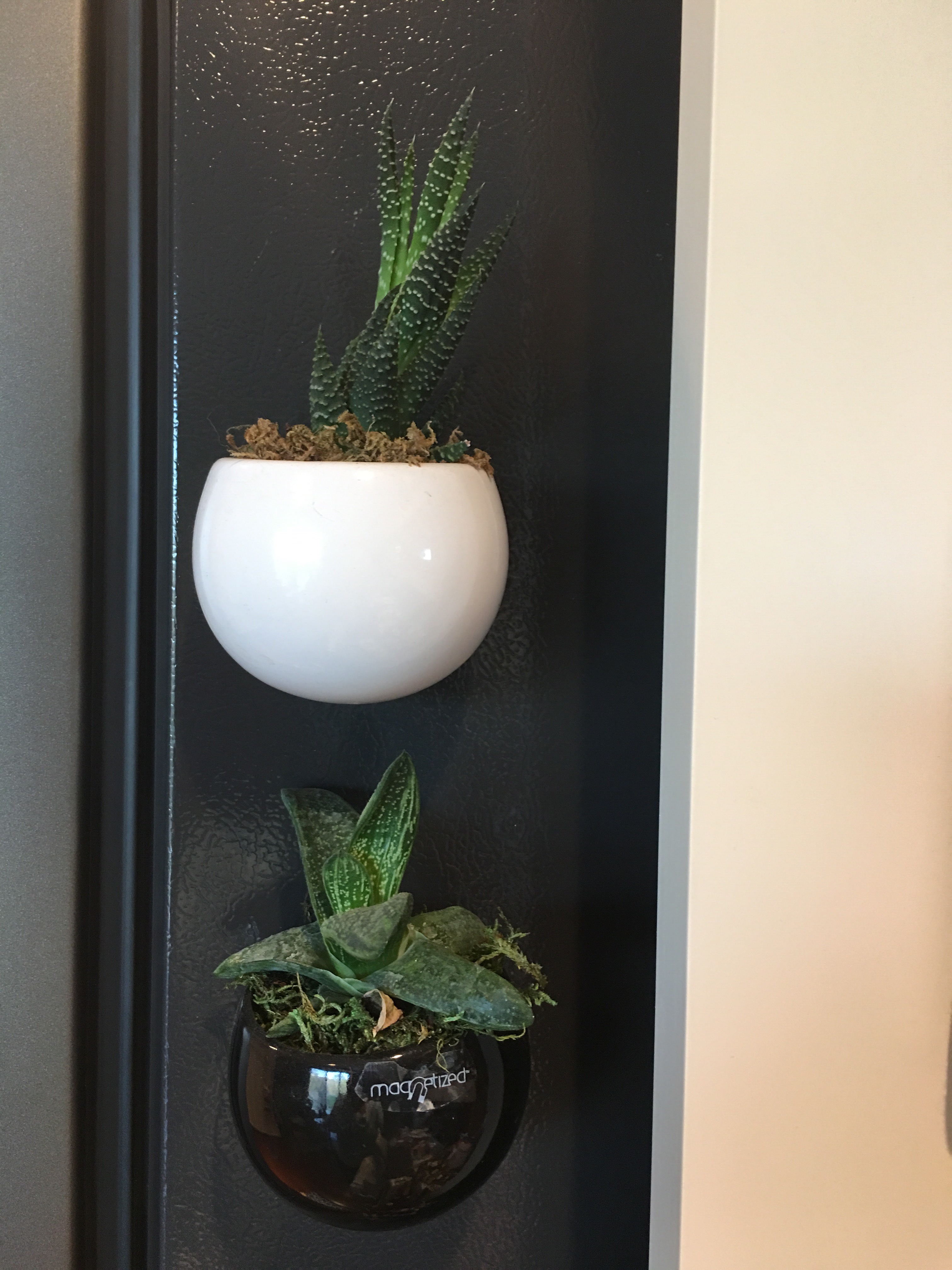 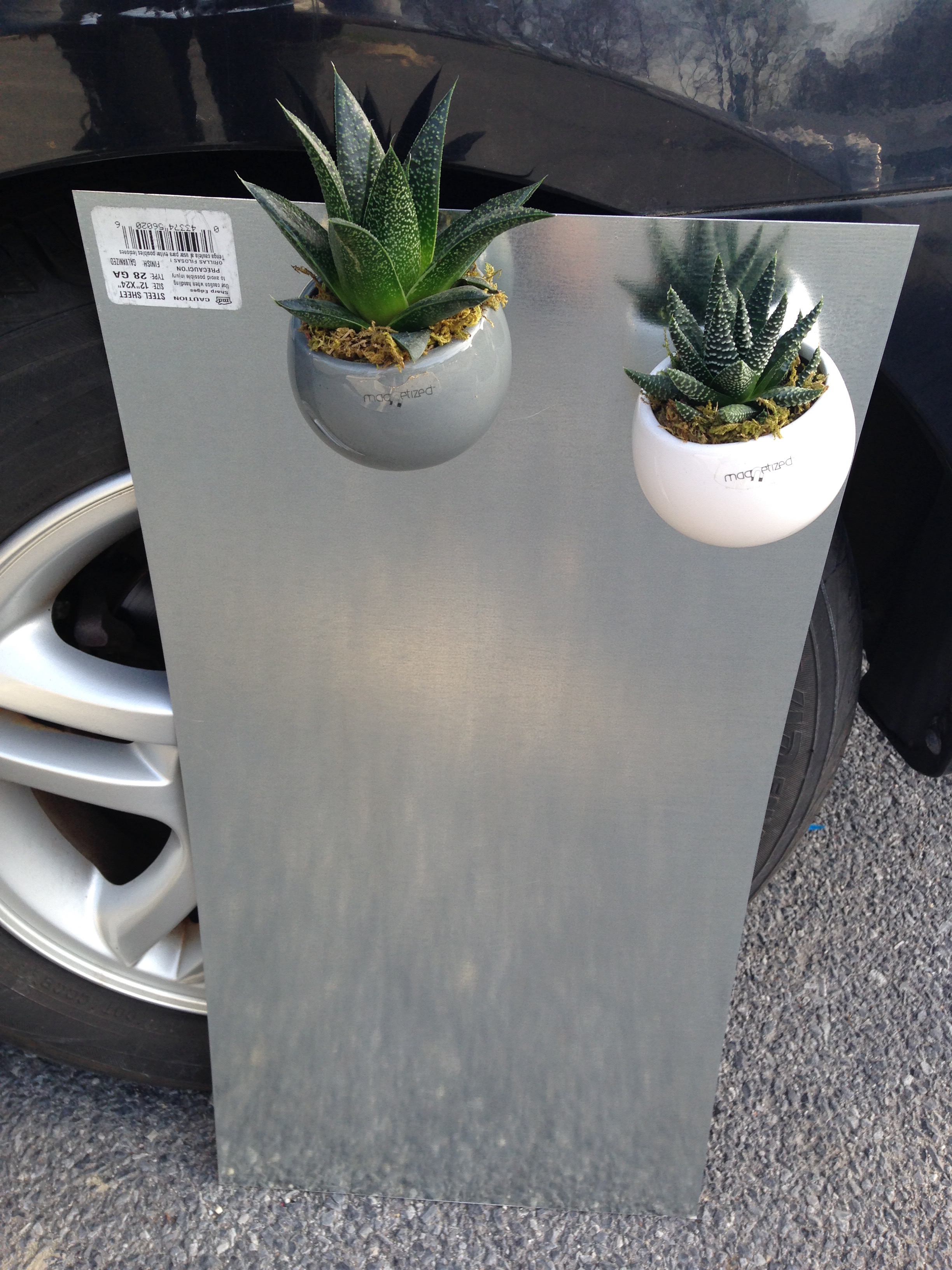 Uhm, yeah…the leaves were a lot more thick and perky back then. Time to focus more on these little guys in the nurture department.

And we can’t forget these little guys I brought home before the big 2016 Blizzard hit in February. 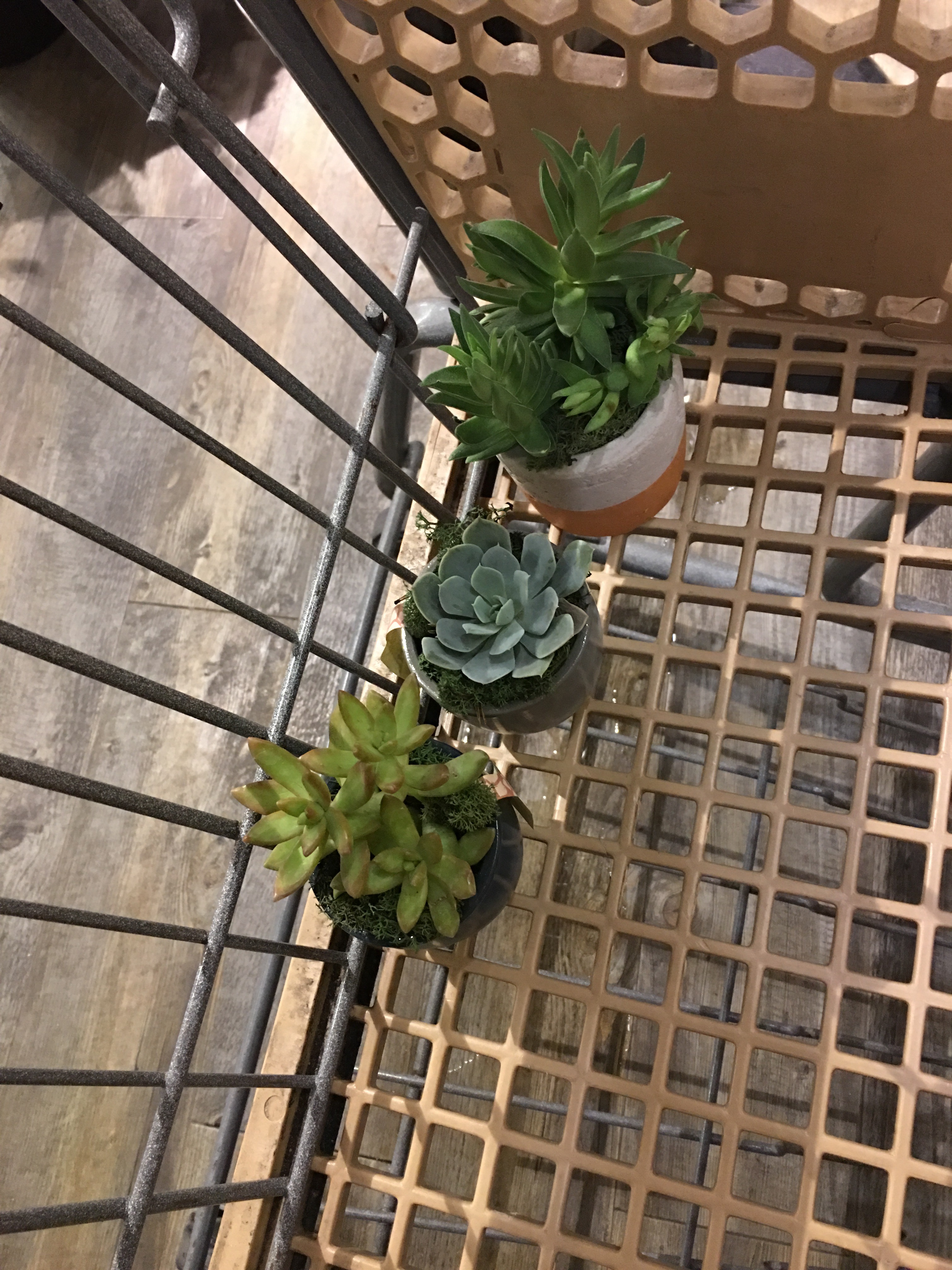 I must make sure to keep these fellas happy as well. 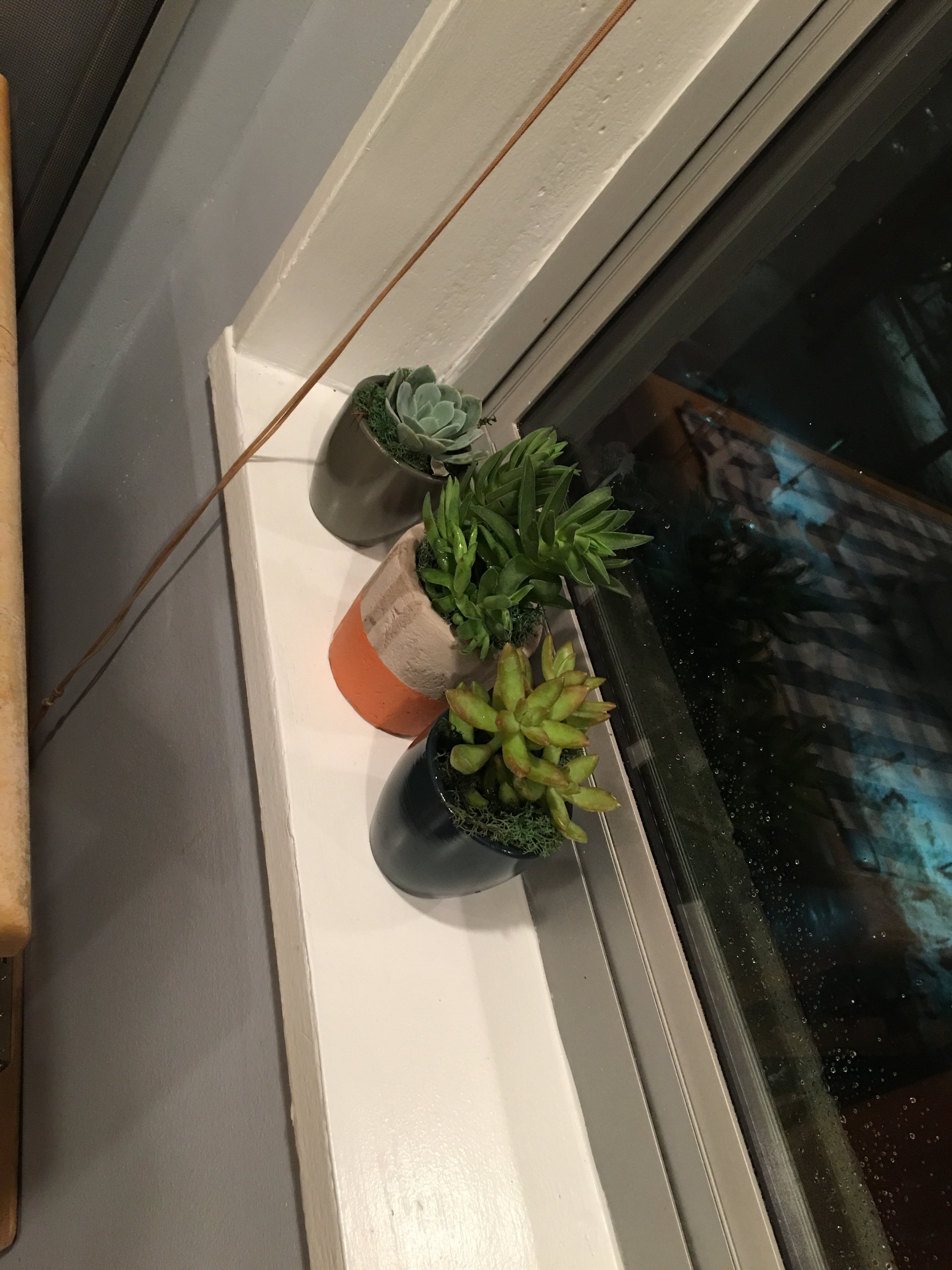 Verdict? Do not forget the little buds (or the air plants! I’ll feature those in an upcoming post). Sunlight and tiny doses of water are what the plants in the magnet pots crave. But once they grow up, must repot asap.

New kid on the block – the Zamio.

I couldn’t resist bringing this Zamio plant home from IKEA. It’s still in it’s plastic liner pot. I plan to repot by the end of the month so that it can have it’s official welcome. 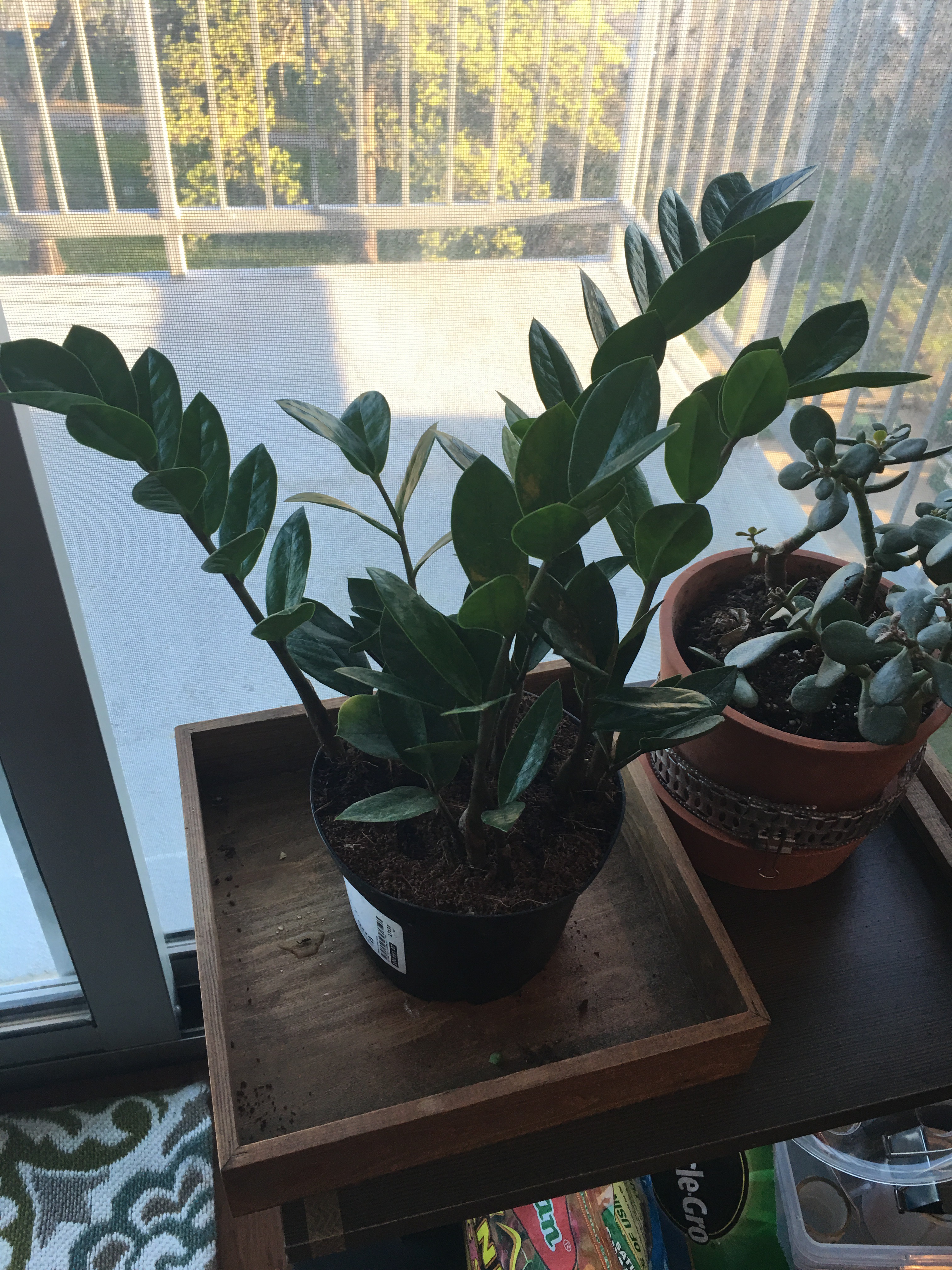 Full name for this beauty…the “Zamioculcas”. Love that IKEA puts big clear labels on the pots with the plant names. 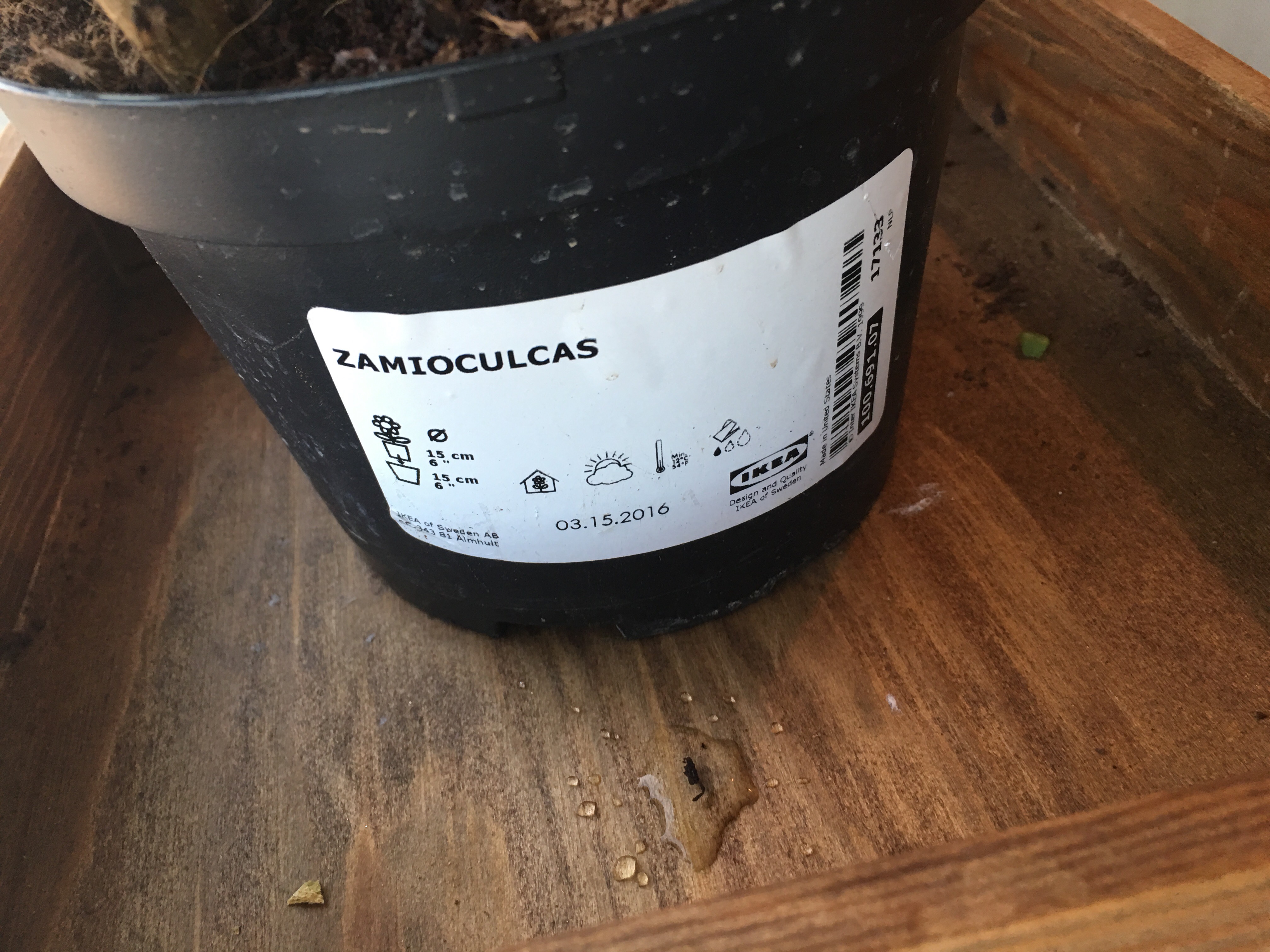 Verdict? Time will tell. I will keep you posted! V-